Held at the Prince Snooker Club in Brooklyn, New York, this is the annual showpiece event on the United States Snooker Association (USSA) circuit. Played across a quartet of days and completed on Memorial Day Monday, the starting field was initially divided into groups with subsequent qualifiers making it through to the knockout phase.

Elsayed, who recently competed at 2018 Q-School in England, won all six of his matches without dropping a frame to top Group B.

He continued his streak into the knockouts with 3-0 and 4-0 victories over Thomas Tan and Tim Lee respectively. Elsayed then eliminated two-time winner Ajeya Prabhakar 4-2 in the semi-finals.

Elsayed’s opponent in the final was fellow New Yorker and defending champion Raymond Fung, who was also undefeated on route, although he did need to come back from 2-0 down to oust Henry Wong 3-2 in the last 16 on the final black.

The best-of-nine frames final saw Elsayed establish a 3-1 lead going into the mid-session interval. On resumption he extended that advantage to 4-1, and although Fung chalked up frame six, Elsayed completed the job in the following frame for a 5-2 success.

National champion three years running from 2009, Elsayed had lost in the final in each of the last three years, including to Fung 12 months ago via a deciding frame.

Image above is courtesy of the United States Snooker Association.

Article written and published by Michael Day on the 29th May 2018. 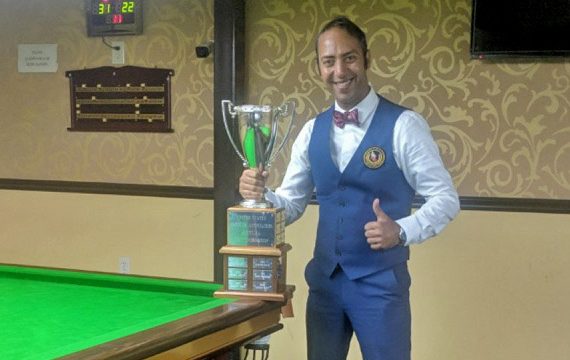