The five-day event held at the Best Western Hotel Goldenmile Milan was the culmination to the domestic season. National governing body the Italian Sport Billiard Federation – a member of the World Snooker Federation – was celebrating its fifth annual edition of the competition. A total of 55 players from seven different regions across Italy participated in three separate categories.

Naples based Garzia, representing the Mezzo Colpo Billiard Club Bologna, qualified top from his round robin group without losing a frame before defeating Alessandro Bacchetta (4-1) and Antonino Foti (4-2) in the quarter and semi-finals respectively.

In the title match 32-year-old Garzia faced debut finalist Valerio Grandi, who likewise was undefeated on route, and had eliminated last year’s runner-up Stefano Battelli, 4-0, in the last four. During an encounter that lasted five hours, Garzia initially led 2-0, later trailed, but claimed the last two frames to emerge from a deciding frame, 5-4.

Multi-discipline cueist Garzia, who played at the European Amateur Snooker Championship earlier this year, said – “It was a tough tournament, especially when you defend a title this puts on massive pressure. Fortunately, my experience of playing on the big stage pool scene let me handle the pressure well; I scored half-centuries in the group stage.

“It was hard to win with a player like Valerio in the final. I never give up – I was 4-3 down in frames and behind 40-1 on points. In the final frame I think I showed some good quality snooker; I have given the game some quality practice time and hard work. I want to say thank you to my friends, family and sponsor Taom Billiards, now I look forward to playing in more, and maybe even bigger, snooker events. I can’t wait for that.” 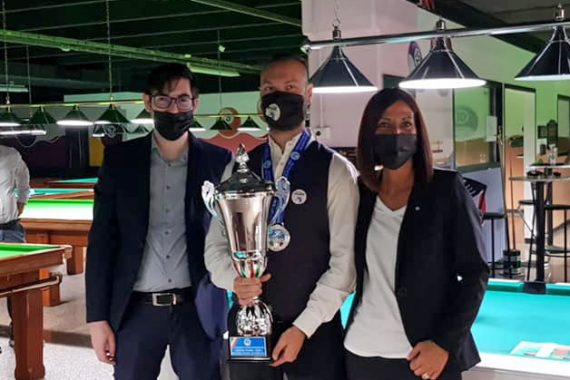