Held at the KN Club in the capital city of Vilnius, the tournament was organised by the national governing body – the Lithuanian Billiard Federation – which holds a series of ranking tournaments during their domestic season. Nearly 40 competitors from across the Baltic state entered.

Schulte dropped just one frame in his opening two rounds before making breaks of 67 and 45 in a 4-0 quarter-final win against Simonas Dragūnas. He then eliminated Tomas Puodziunas, 4-1, to secure another final appearance.

Tadas Andrejevas was his opponent in the title match; Andrejevas had seen off last year’s runner-up, teenager Nikita Kolpacenko, in the other last four tie. However, Schulte continued his dominance in retaining the title, wrapping up a 4-0 triumph with a run of 62 in the last frame.

Lithuanian champion for the first time in 2015, 24-year-old Schulte took part in the European Amateur Championship earlier this year where he qualified top from his group before bowing out in the last 64. 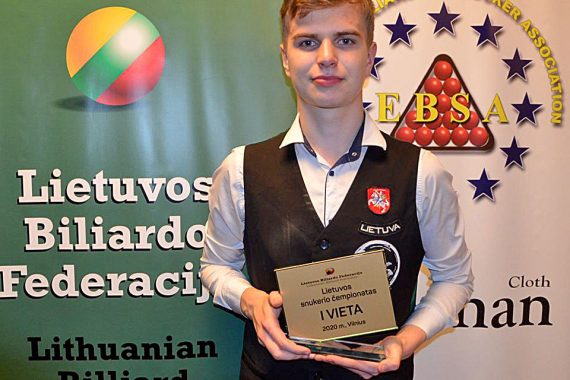